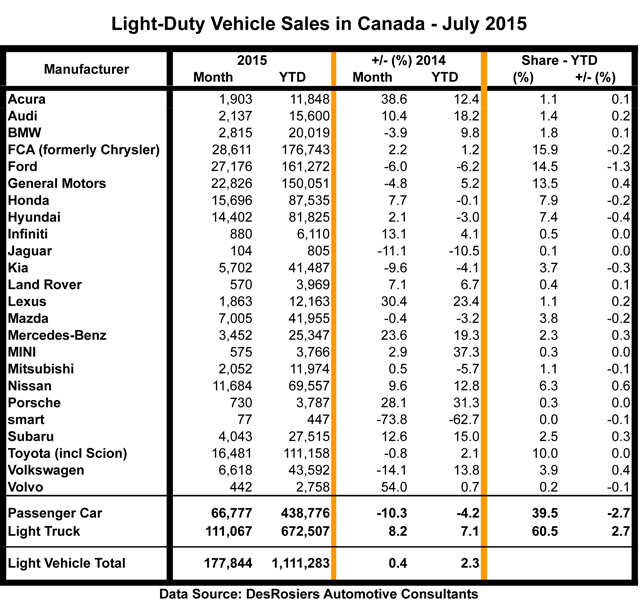 New-vehicle sales in Canada began the second half of the year with the same intensity they exhibited in the first half. July sales of 177,844 vehicles once again set a new monthly record, for the seventh month in a row. They surpassed year-ago sales for the same month by 0.4 per cent and the past-five-year average by 14.8 per cent. July was the 16th consecutive month of year-over-year growth.

Year-to-date sales remain 2.4 per cent ahead of 2014, keeping 2015 on track toward a new record sales year in Canada.

“In spite of the economic volatility both globally and here at home, Canadian auto sales continue to demonstrate resilience,” said David Adams, president of the Global Automakers of Canada. “In the face of falling consumer confidence, Canadians still purchased vehicles in record numbers,” he said.

While the year-over-year percentage improvement for the month may be small, it is significant. It was in July 2014 that sales really took off, initiating a second-half surge that resulted in another record year. For that reason, it will be tougher to maintain year-over-year growth through the second half of 2015.

The SAAR had been in decline for the past three months, falling below the level needed to ensure a new record for 2015. But if it remains anywhere near July’s pace for the rest of the year, another new record will be guaranteed.

FCA ON TOP AGAIN
Once again, FCA Canada (formerly Chrysler Canada) topped the sales charts in July with 28,611 vehicle sold – a 2.2 per cent increase over last year. Year-to-date sales are up by 1.2 per cent, extending FCA’s first-place lead over Ford to more than 15,000 vehicles.

Ford’s sales were down again in July, by 6.0 per cent, keeping it in line with its 6.2 per cent year-to-date decline. The Blue Oval continues to hold onto second place in the rankings both monthly and year-to-date, extending its lead over General Motors —whose sales also declined by 4.8 per cent in July.

Toyota (-0.8 per cent) remained unchallenged in fourth place with Honda (-0.3 per cent) now securely in fifth. After being outsold by Nissan last month, Hyundai (+2.1 per cent) regained sixth place, followed by still-surging Nissan (+9.6 per cent). Mazda (-0.4 per cent) once again surpassed Volkswagen (-14.1 per cent) for eighth place, pushing Kia (-9.6 per cent) down to 10th.

Year-to-date, the top five remain in the same order as for the month. The order from sixth through 10th is Hyundai, Nissan, Volkswagen, Mazda and Kia.

YEAR OF THE TRUCK
Increasingly, 2015 is becoming the year of the truck, said David Adams. Light duty trucks, including SUVs, captured 62.5 per cent of the market in July, increasing their year-to-date sales to 60.5 per cent.Truck and SUV sales were up by 8.2 per cent for the month, while passenger-car sales fell by 10.3 per cent.

Among mainstream brands, Subaru once again achieved the greatest gain with sales up 12.6 per cent from last July.

[NOTE: Data quoted in this report were sourced from DesRosiers Automotive Consultants, Global Automakers of Canada and individual automakers.] 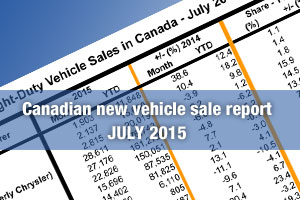 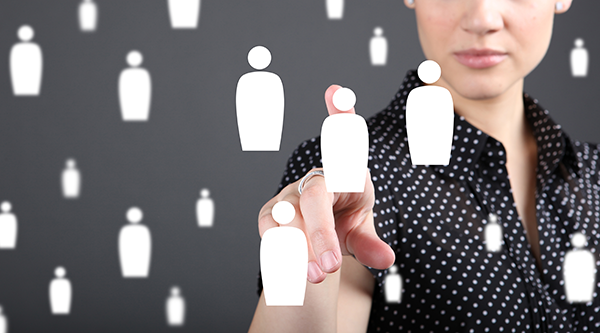 Are your customers truly loyal?

There are a host of programs to encourage loyalty. But are they effective in the long-run? Customer satisfaction will always be a fundamental part of running any successful business, but satisfaction is not the end goal. The end goal should … 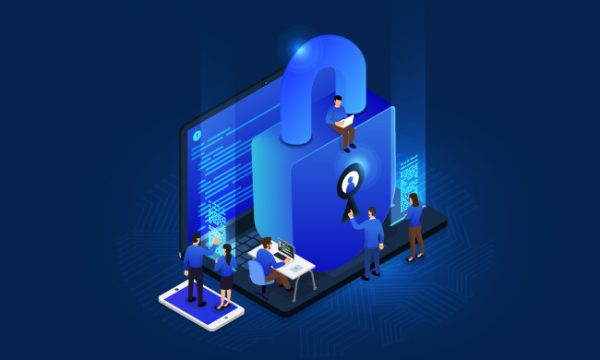 Why invest in cybersecurity? 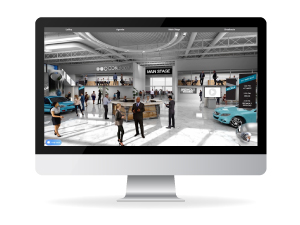 The true meaning of modern retail

CDK Global hosted its inaugural industry conference known as CDK Connect virtually on October 6, previewing new technology and exploring the benefits of the Roadster and Salty acquisitions on the overall modern retailing front. One interesting conversation stemming from the … 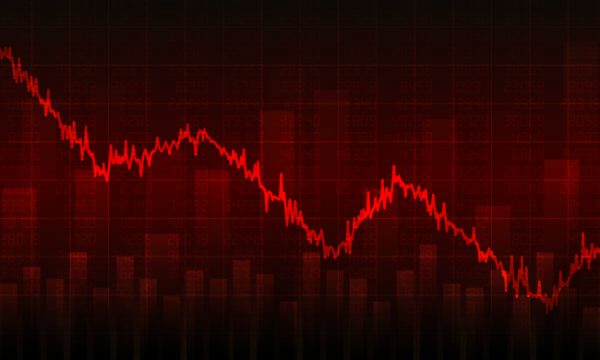 Never at a loss for words, Canada’s best known automotive analyst Dennis DesRosiers said he’s struggling to accurately predict the economic impact of the COVID-19 virus, and more specifically how it will affect employment in the sector and vehicle sales. … 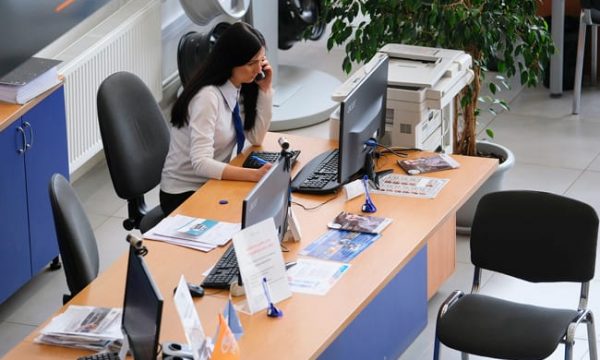 Conversational AI company Conversica has announced new findings from its annual study that may help dealers improve their service department results, according to a news release. Their 2017 Sales Effectiveness Report on Lead Follow-Up in the Automotive Industry reveals that … 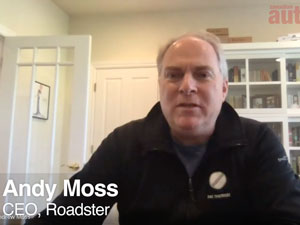 Andy Moss, CEO of Roadster, has been watching the auto industry move quickly to adopt digital retailing — but now it’s in overdrive. Michelle Denogean, the company’s CMO, discusses how dealers are adapting, and the longer-term implications for digital commerce …