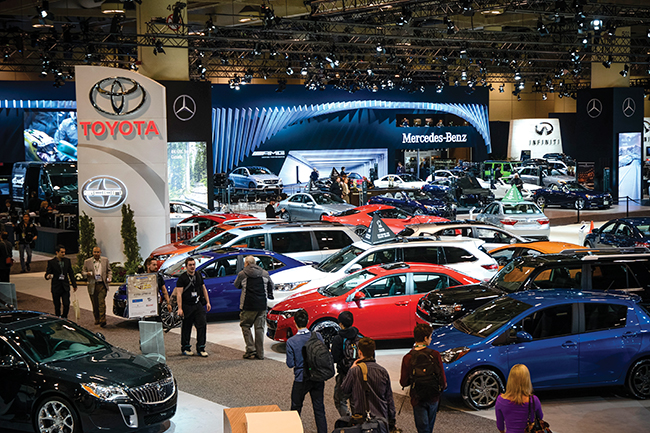 The media preview day kicked off the 42nd Canadian International AutoShow in Toronto.

THE THEME OF THE 42ND EDITION of the Canadian International AutoShow (CIAS) held in Toronto is “Life is in Motion” — and there was plenty of motion during the Media Preview day on Thursday, Feb. 12.

As per the usual drill, packs of journalists, photographers and videographers moved from booth to booth throughout the vast show floor to capture images of the newest models. This year’s show featured dozens of unveilings and 45 Canadian firsts.

Some of those unveilings include the Audi TTS coupe and TT roadster, the BMW M6 Coupe and 650i Cabriolet, the Mustang GT350, Acura NSX and the Mercedes AMG GTS.

Media Preview day is also when organizations announce their various award winners, such as the Canadian Black Book 2015 Best Retained Value awards and the AJAC Car and Canadian Utility Vehicle of the year.

AJAC AWARD WINNERS
Not unlike the Oscars, OEM leaders were on hand hoping that their name was called out when it was time to crown this year’s AJAC Canadian Car and Canadian Utility Vehicle of the Year winners.

The award winners are determined after an exhaustive three-day Test Fest event where 70 AJAC journalists test drive 150 vehicles back-to-back, and generate more than 1,640 test drives. These tests produce 106,405 data points and more than 500 category ballots. The scores are rated and then are tabulated, and AJAC doesn’t even know the winners until KPMG presents them with the winners on the day of the event. 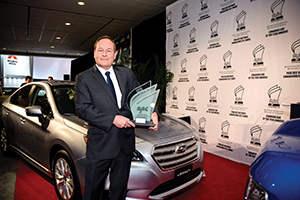 Ted Lalka, vice-president of Product Planning and Marketing, Subaru Canada, with the AJAC Award for the Canadian Car of the Year 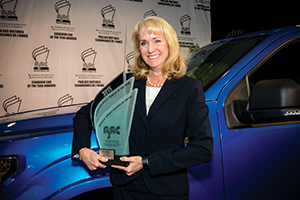 Dianne Craig, President and CEO of Ford Canada with this year’s Canadian Utility Vehicle of the Year winner,
the Ford F-150

The finalists for the AJAC Canadian Car of the Year were:

This year’s Canadian Car of the Year was:

The Canadian Utility Vehicle of the Year finalists were:

This year’s Canadian Utility Vehicle of the Year was:

“This is tremendous,” said Dianne Craig, President and CEO of Ford Canada, when accepting the award. “This is just a great day for us.”

“It just makes us so proud and humbled, so thank you so very much,” she said.

It was a good morning for Ford, as this was the year it kicked off Media Preview day. Ford invited Joe Hinrichs, Executive vice-president and President the Americas for Ford Motor Company, to deliver the morning address.

He discussed what he called four “megatrends” around the future of mobility that is driving Ford’s thinking.

Hinrichs went through each of the societal challenges these megatrends create, and explained how Ford was responding.

In terms of autonomous vehicles, Hinrichs said Ford is already making great progress and is actively testing different vehicle technologies. “Our priority is to make the first autonomous vehicle available to everyone and not just luxury customers,” says Hinrichs. 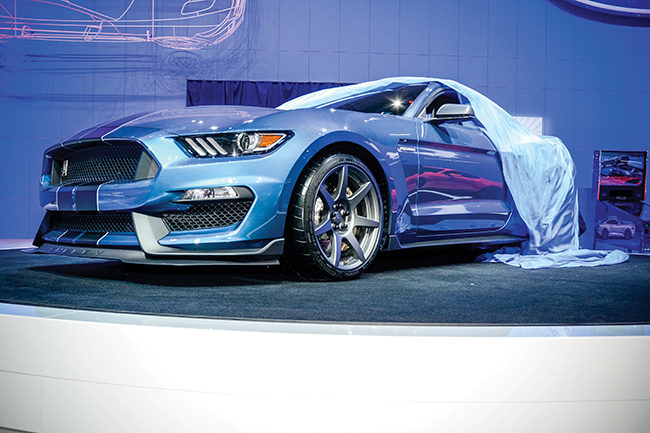 The unveiling of the mighty Mustang GT350

He also discussed ways that Ford wanted to improve its customer experience, making it simpler and easier for customers to interact with Ford and its dealers. The company wants to move from a “transaction” to a “true ownership” experience, which means things such as new digital shopping tools, new ways to finance vehicles, and booking service appointments online.

This year’s CIAS show was about a lot more than just new vehicle launches. There were a host of interactive and themed displays aimed at engaging consumers and firing their imagination about vehicles and mobility.

The Art and the Automobile exhibit, presented by the Cobble Beach Concours d’Elegance and Murdoch Mysteries, featured 19 Concours-quality classic cars that span the decades from the early 1900s to the late 1960s. Canada’s oldest car — a Seth Taylor steam buggy from 1867 — was also represented.

Auto Exotica was also back, featuring exotic and luxury vehicles that are out of reach for most attendees, but still inspire their dreams. Attendees took in vehicles such as the Aston Martin Vantage GT, the Bentley GTC, the Lamborghini Huracan, the Rolls-Royce Wraith, and others. 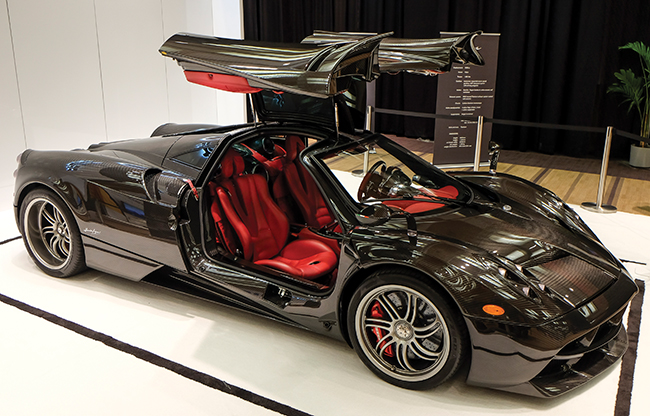 There was also an educational component showcasing some of the work of Canada’s automotive designers who did live demonstrations of 3D and clay modeling. Visitors could also try their hand at sketching a vehicle or building their own clay model.

There were also concept cars, the world’s smallest car, and a host of other eye-catching activities to ensure that the Canadian love affair with their vehicles continues to grow — so that dealers can continue to provide for them.

The CIAS is the largest consumer show in Canada, and organizers expected as many as 300,000 to attend the 125 exhibits, displaying more than 1,000 cars and trucks in 500,000 sq. ft. of exhibit space filling the vast north and south Metro Toronto Convention Centre. This year’s event ran from Feb. 13-22. 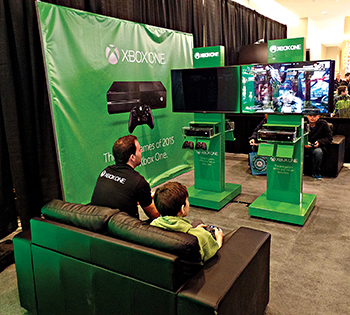 FAMILY DAY IN ONTARIO is always a big boost for attendance at the Canadian International AutoShow, and this year was no exception.

Organizers pulled together all sorts of special events, special pricing, contests and giveaways to help lure Ontario residents out of their warm homes to make the trek downtown to the Metro Toronto Convention Centre.

All of this activity is good news for dealers, because the annual event drives up interest in new vehicles and generates lots of leads for local dealerships.

“The Canadian International AutoShow is a truly inclusive event but there’s no doubt that the most inclusive, and engaging day at any CIAS is Family Day,” said Jason Campbell, General Manager, Canadian International AutoShow. “Families need cars, but kids love cars. This year’s Family Day experience is our most special yet, offering an incredible number of activities, giveaways and Family Day exclusive contests. You don’t have to be a family to attend, of course, but this is the day that families really should attend.”

When visitors ask for a “Volkswagen Family Ticket” at the door, their $45 entry fee covers them for two adults and two children, which is a great value.

While mom and dad were shopping, the X-Box gaming zone also gave young people a chance to test drive a few video games. Another kid-friendly activity included kids under eight who would drive a mini pick-up truck in the Ford F-150 trail, and the Volkswagen Children’s Playcare Centre provided a safe place for smaller children to be entertained.

Another fun exhibit for the whole family was the Ripley’s Believe it or Not! exhibit featuring the world’s smallest car, and other Ripleys’ displays and props from its museums.

The four phases of car buying are thinking, researching, buying and caring. There are three types of buyers that walk into your dealership: “self-serve,” the “facilitator” and the “handhold.” 90% of shoppers make up the self serve and facilitator category, … 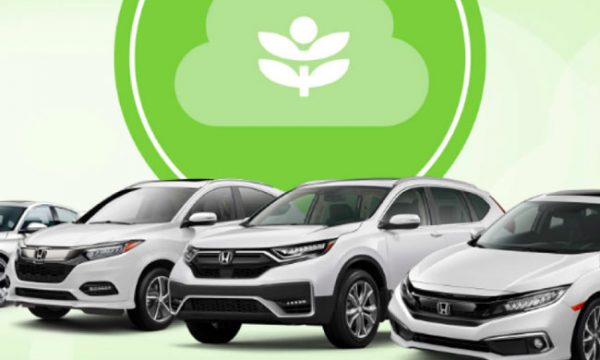 Honda Canada launched a new awareness campaign on January 6 that informs consumers about the CO2 emissions ratings of each vehicle in its Canadian lineup. In a news release, the OEM said its “Driven to Reduce Emissions Since 1948” campaign … 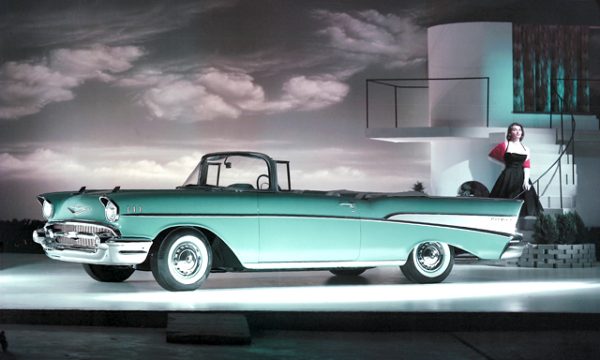 IN THE FIFTH PART OF OUR HISTORICAL SERIES, WE EXAMINE THE 1950S, WHICH WERE FAR FROM FABULOUS FOR DEALERS AND MANUFACTURERS   Canada had been battle-toughened in the Second World War, and when those soldiers came home to civilian life, … 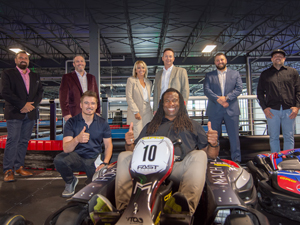 Quebec race car driver Alex Tagliani and his business partners recently launched a family entertainment centre at Plaza Sainte-Thérèse, Que., along Highway 15. The TAG E-karting & Amusement Centre is open to the general public and is meant to provide … 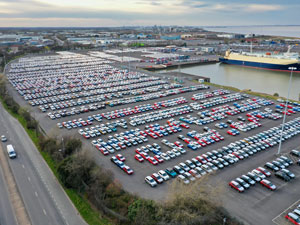 European vehicles that are imported into the U.K. may be subject to a 10 per cent import tariff next year unless a free trade agreement is reached with the European Union. The U.K. is planning to default to World Trade … 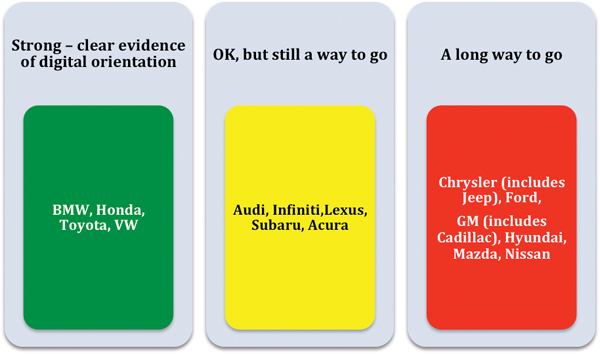 Are tablets the answer?

RICHARD COOPER POSES THE QUESTION OF WHETHER TABLETS WILL SERVE TO ENHANCE THE OVERALL CUSTOMER EXPERIENCE WHEN IT COMES TO DEALERSHIP SHOWROOMS Last year, I wrote about the “digital face” of dealerships and the divide between the digital world consumers …